Because of its focus on sensitive strategic issues, Bridges does not generally reveal the names of clients, following the precedent set by Bain & Company and Kissinger Associates. In the 70s the partners at Bain & Company (founded 1973) carried no business cards and referred to clients by code names. Kissinger Associates (founded 1982) to this day does not reveal clients and allegedly forbids them from disclosing any relationship with the firm. Bridges´ policy is similar, albeit not quite as strict.

Many readers are understandably curious about the credentials and track record of the author of a book. Therefor for the Bridges Strategic Growth E-Textbook, an exception to the general reticence about clients is made. In these subpages seven wondrous wins and their counterpart, thirteen lamentable losses, are revealed, "full disclosure," or almost. For examples of really flagrant failures, where not merely 100s of millions, but billions of dollars, were just pulverized see A. Seven Key Factors to Fantastic Failures and Billion Dollar Blunders at VIII. Turnaround Strategy.

Everyone loves to write about winning, but

writing about losing is more important!

Why? To learn from failure, even failure long ago, is far easier than to try to repeat yesterday’s successes in today’s turbulent times. What delighted the customer 50 years ago ("It even comes in color!") may not impress much today. However what enraged a customer 50 years ago -- to the point of suing the company -- has a pretty good chance of enraging a customer today. Therefore the wondrous wins are described in paragraphs, the lamentable losses in pages.

The presentations of wins and losses reflect differences among cultures, especially between those of the U.S. and Germany. Germans may be compared to coconuts, with a hard shell covering a huge, fleshy, fiercely protected “private fruit” sphere. Bragging, admitting failure and sharing information all tend to fall within that private sphere.

Americans may be compared to peaches. Propounding personal success (bragging), publicly admitting and recounting failure and sharing all kinds of information all belong to an unprotected “public fruit” exterior. Privacy is limited to the small hard nut in the middle.* For example, Americans will discuss frankly, both within the company and outside, what their salaries are. After all, one's salary reveals very little about one's wealth.

A young public school janitor might have taken the $13,000 he inherited from an aunt to buy 3,000 shares of Apple at its low of $4 a share. He had seen Apple computers at the school, thought that must be a good company, and was too dumb to ask a stock broker for advice. Twenty-five years later he still has his "no-brainer" job; he loves the school, likes the benefits (health insurance), and the work is easy. He likes his Apple shares even better, which, at $330 and climbing (May, 2011), have made him a millionaire.

Meanwhile the school principle, with his fat six figure salary, is paying alimony to three ex-wives and has a serious Las Vegas gambling habit. He is about to file personal bankruptcy. Because of such scenarios, Americans find secrecy surounding anyone's salary peculiar, even though they are just as reluctant to reveal their net asset worth as Germans are.

In any case, in "Testimony" the U.S. approach of "full disclosure" (well, almost) is taken.

“Do (a culture´s) members locate themselves in a shared public space or in mutual private spaces. The distinction carefully drawn in Figure 5.12 (the “fruit” circles) derives from the work of the German-American psychologist Kurt Levin. . .”

Kurt Levin (1890 – 1947) was one of the first to study organizational development and became the director of the Center for Group Dynamics at MIT in 1946. Unfortunately he died of a heart attack the very next year. 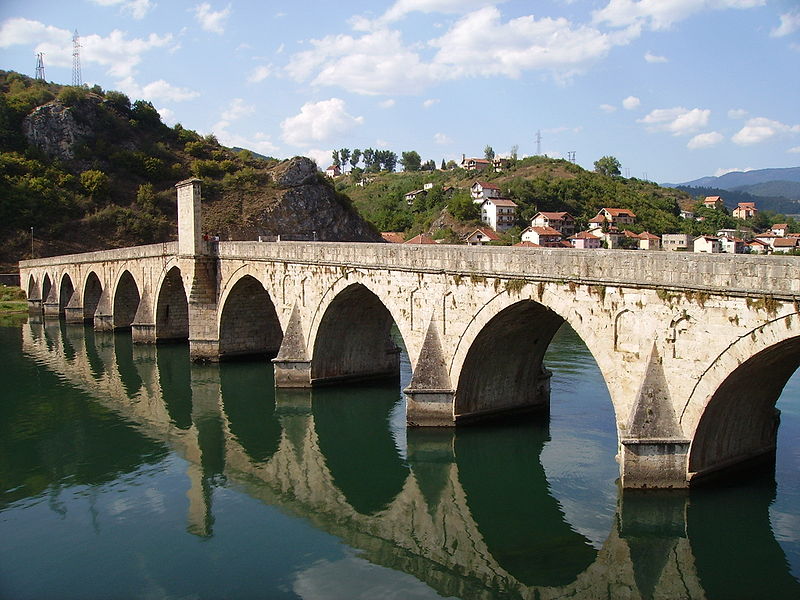 "The Bridge on the River Drina" at the town Visegrad,
scene of a famous novel and infamous massacre.
1

In executive coaching, to have experienced failure is a better background than uninterrupted success. One has done it the wrong way -- and knows the warning signs all too well. One has failed, overcome, and learned how to do it right: not "vini, vidi, vici" – I came, I saw, I conquered; but rather "vini, defeci, devici " - I came, I failed, I overcame."

As an example of how difficult it is to repeat success, let us consider a low technology business, which delivers pretty much the same service today as that which was offered 50 or 100 years ago, viz. dance instruction. Arthur Murray (born in Austria-Hungary in 1895, deceased in the U.S. 1991) began teaching people how to dance in New York City in 1912.

Before the advent of World War I, he had the idea of teaching dance steps with simple footprint diagrams. Within a couple of years he sold over 500,000 dance courses by mail order. In 1925 he started one of the very first franchise systems for a service business in the U.S. (Today the initial franchise fee ranges from ca. $15,000 to over $100,000.) He eventually employed 200 dance teachers in New York City alone, 1,500 in the U.S. Arthur Murray was earning $5,000,000 a year in the days when a single dollar would buy a meal at a decent restaurant and when taxes were a fraction of what they are today.

A popular Latin dance nowadays is Salsa. Munich has an active dance scene, including 15 different Salsa studios. (In 2010 the Arthur Murray web site opened with music from Salsa. The updated 2011 website, although much flashier, is also quieter -- no more Salsa music.) Yet none of the three largest Munich Salsa studios has even a half-dozen dance teachers. Most of the other studios are run by a dance couple or are one-person operations. Talk to any one of the owners about how Arthur Murray built his business and his brilliant marketing, and they would immediately blurt out the absolutely legitimate objections: "Why the man started out with no web site at all. He did not even have a mobile phone, let alone a smart phone. How can you build a business like that nowadays?"

1 "The Bridge on the River Drina" at the town Visegrad is also the title of a novel published in 1945 by the Yugoslavian writer Ivo Andric. It is the main reason he won the Nobel Prize in Literature (1961). The novel focuses on the Muslims and Christians of Bosnia, covering four centuries during the Ottoman and Austrian rule of the region. The bridge, which was built by an Ottoman vizier in 1571, occurs as a leitmotiv in the novel. (Wikpedia, 2011)

The town and bridge today are best known, correction, vaguely recollected, as the site of the Visegrad Massacre.  In 1992 at the beginning of the Bosnian war, the Bosnian Serb army burned hundreds of Muslims alive in their homes. Others were shot on the bridge and thrown off of it. These kinds of atrocities are more often than not reported in the press as "unfortunate cultural misunderstandings," "political disagreements," or "collateral damage." (The politically correct attitude common among "the enlightened," both Christian and Muslim, is that: "Cultures are not right or wrong. They are just different.") Atrocities by both sides quickly become yesterday's news and are forgotten, no lessons learned.