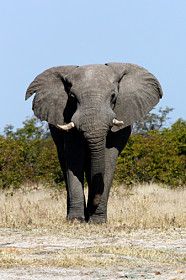 This non-profit organization was founded by Iain Douglas-Hamilton. He is a zoologist with a PhD from Oxford who is an authority on African elephants. Among the many companies that have supported Save the Elephants is the firm with which this domain is registered, as explained in the footnotes.1 Our elephant mascot Qoogol is adamant that Save the Elephants should be everyone´s number one priority. He wishes to remind you of the sterling, heroic character of Horton the Elephant to encourage your contribution.

"Horton is a kind, sweet-natured elephant who cares about other animals or people. Though he goes through many hardships, whether trying to keep an egg warm through storms, rough travels, and humiliating shows, or tries to save a small planet from harm, he always triumphs."2

In the first book, the egg hatches into an elephant-bird. In the second, Horton struggles to protect a microscopic planet in the face of the incredulity of his neighbors, who do not believe it even exists. Thanks to his efforts the planet is saved and respected by the others. Horton is characterized by his generous nature and respectful compassion.

1 The paragraph below is from the April 2011 newsletter Namecheap sends its customers.
"At the end of last month, it was brought to our attention that our elephant friends were being hunted and killed for sport. As you know, we´re champions of environmental causes and consequently launched our own $4.99 (domain) transfer promotion. We´re delighted to inform you that you helped us raise over $20,000 for Save the Elephants, an internationally recognized conservation group -- and on top of that, Namecheap will donate another $10,000. A big thank you to all of our customers for joining us and recommending us to friends and family."
2 Wikipedia (2011). Twentieth Century Fox made a charming animated film of "Horton Hears a Who!" in 2008. The film was directed by Jimmy Hayward and Steve Martino. It features voice-overs from an all-star cast that includes Jim Carrey (Horton), Steve Carell (the Mayor) and Carol Burnett (the sour Kangaroo).
A still of Horton crossing a bridge would be shown on this page. However the legal department of Twentieth Century Fox stated that it categorically refused to license Horton images (April, 2011). Therefore the appearance of this still on 225 other websites is presumably illegal - a violation of copyright - as well as, one presumes, most (almost all?) of the other 300,000 Horton images which appear on the Internet (source - Google images, 2011).