The Six Blind Men and the Elephant

The parable has been referred to in disciplines from biology to physics. It originated in India and is part of Buddhist and Hindu lore. It is quoted at the beginning of Strategy Safari, A Guided Tour Through the Wilds of Strategy Management, by Henry Minztberg, Bruce Ahlstrand, and Joseph Lampel, Simon & Schuster, 1998, p. 2 f. They write:

“We are the blind people and strategy formation is our elephant. Since no one has had the vision to see the entire beast, everyone has grabbed hold of some part or other and "railed on in utter ignorance" about the rest.” The poem concludes with a moral that makes a compelling point about fundamentalists -- of any persuasion. The moral seems particularly relevant in today's divisive world. 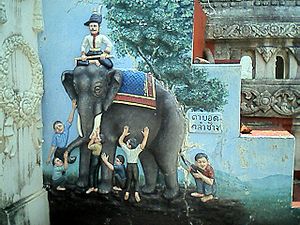 It was six men of Indostan
To learning much inclined,
Who went to see the Elephant
(Though all of them were blind)
That each by observation
Might satisfy his mind.

The First approached the Elephant,
And happening to fall
Against his broad and sturdy side,
At once began to brawl:
"God bless me but the Elephant
Is very like a wall."

The Second, feeling of the tusk,
Cried, "Ho! What have we here
So very round and smooth and sharp?
To me is mighty clear
The wonder of the Elephant
Is very like a spear!"

The Third approached the animal,
And happening to take
The squirming trunk within his hands,
Thus boldly up and spake:
"I see," quoth he, "The Elephant
Is very like a snake!"

The Fourth reached out an eager hand,
And felt around the knee.
"What most this wondrous beast is like
Is mighty plain," quoth he;
"Tis clear enough the Elephant
Is very like a tree!"

The Fifth, who chanced to touch the ear,
Said: "E´en the blindest man
Can tell what this resembles most:
Deny the fact who can,
This marvel of an Elephant
Is very like a fan!"

The Sixth no sooner had begun
About the beast to grope,
Than, seizing on the swinging tail
That fell within his scope,
"I see," quoth he, "the Elephant
is very like a rope!"

And so these men of Indostan
Disputed loud and long,
Each of his own opinion
Exceeding stiff and strong.
Though each party was partly in the right,
And all were in the wrong!

So oft in theologic wars,
The disputants, I ween,
Rail on in utter ignorance
Of what each other mean,
And prate about an Elephant
Not one of them has seen.