The Coaching Elephant is a first cousin of the powerful and much misunderstood Strategy Elephant. The latter has been the subject of a famous poem: "The Blind Men and the Elephant" by John Godfrey Stone (1816-1887). Each blind man encounters a part of the elephant (ear, knee, side, trunk, tusk, tail) and is convinced his experience represents the entire "gestalt" of "elephant." The poem is reproduced on its subpage.

The seminal book Strategy Safari, A Guided Tour Through the Wilds of Strategic Management by Henry Mintzberg, Bruce Ahlstrand and Joseph Lampel, Simon & Schuster, 1998, starts with this poem (p.2 f.), followed by these sentences:

"We are the blind people and strategy formation is our elephant. Since no one has had the vision to see the entire beast, everyone has grabbed hold of some part or other and "railed on in utter ignorance" about the rest."

The focus of Bridges coaching is on different aspects of strategy. Therefore it behooves us to treat the mighty and mysterious strategy elephant, depicted below, with the respect he deserves.* 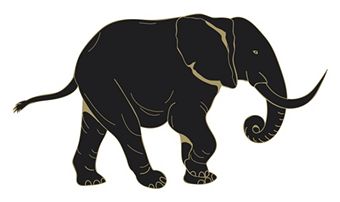 Elephants have a number of qualities desirable for coaching. They have long memories so that they are able to profit from experience. They are often expert trainers, for instance in the forestry industry, where seasoned elephants will train new arrivals.

They are careful about logistics, invariably testing, for example, narrow bridges, to be sure their weight will be carried. They are loyal members of a family unit. They have thick skins. They have a remarkable nose for opportunities, a really long, sensitive, agile and powerful one.

They progress unerringly through the thickest strategy jungle, undeterred by the rushing rivers of market change or the lurking predators of the competition. (A healthy adult elephant has no natural enemies.) They have valuable ivory tusks with them at all times, which they can, if necessary, use for conflict resolution. Intelligent and faithful, they work especially well with an individual leader. Some happy elephants not only do shows with a little bit of dancing but also paint. Their favorite theme is flowers (as shown about three minutes into the linked video.)

Elephants have traditionally been symbols of royal authority, down to the modern day in Thailand. In fact, they have even been associated with deities. Lakshmi,1 the Hindu Goddess of wealth and prosperity, is often depicted a in red robe with a golden lining and standing on a lotus. (The link is to an oil painting of her by Raja Ravi Varma at a subpage of "Don't Start This Business," "Start-up (EBO) Strategy," Services.) Two elephants (sometimes four) are alongside her. The elephants symbolize the name and fame associated with worldly wealth. The implication is that one should share wealth in order to bring happiness to others.

However even elephants have their "skeletons in the closet." The first is that mice allegedly cause some of them to suffer panic attacks. The second is the occasional appearance of the much feared, prodigiously prodigal member of the family, the spendthrift White Elephant. He habitually squanders millions in a heartbeat. He is therefore a mortal enemy of both the Strategy and the Coaching Elephants.

1 Lakshmi is derived from the Sanskrit word Laksme, which means "goal."