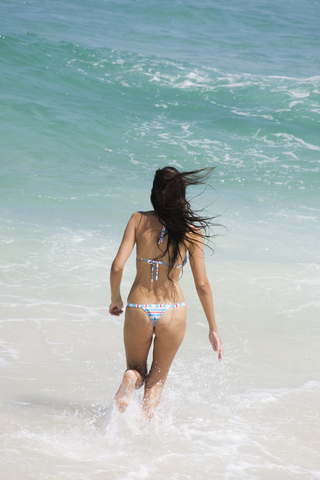 A young man is in business six months, designer bathing suits, has made some domestic sales, and decides it is now time to go international – to Brazil.  English as a lingua franca for business there is not nearly as common as in many other parts of the world, such as Europe and Asia. (Brazilians are much more likely to know Spanish as a second language.) He knows no Portuguese. He does no market research before flying to Rio de Janeiro. He has no contacts there.

Upon returning less than week later, he complains that if he had dreamed international business were so easy, he would have started doing that straight away, instead of struggling for six months to build up domestic sales.  What was his secret?

A woman in an MBA class I was teaching in San Francisco said perhaps I could help her boyfriend. She knew I had been to Brazil several times. Her boyfriend had some really great designs for (the then new) high-tech tan through bathing suits. He had started the business some six months ago. Now that he had sales going in California, he was interested in Brazil. Lots of beaches, lots of sun, good potential he thought. Could I put together some ideas about how to research the market?

Sure, I’d be happy to do that, give them to her the next class, and perhaps arrange a meeting. Sounded like a fun project. The next class she is quite embarrassed when she thanked me for my written report. She confessed that her boyfriend had already gotten on the plane for Brazil that weekend. He had snorted that he was a businessman. He didn’t need to wait around for some fancy business school market research.

I said enthusiasm was always good and Brazil a great place to visit, but “instant business” was not how matters worked in the real world. She completely agreed and was pretty upset at his foolishness. To find out the outcome, see the subpage that follows.