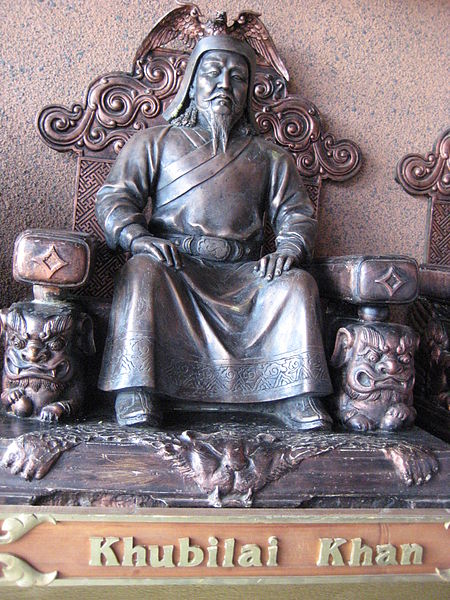 To read the full poem, very nicely presented, click on its title. For a long and detailed analysis of the origins and meanings of the work, see the Wikipedia article about it.

In Xanadu1 did Kubla Khan (the CEO)
A stately pleasure-dome decree (corporate headquarters) . . .

Down to a sunless sea. (the joyless market of yesteryear)

So twice five miles of fertile ground
With walls and towers were girdled round: (security measures)
And there were gardens bright with sinuous rills,
Where blossomed many an incense-bearing tree;
And here were forests ancient as the hills,
Enfolding sunny spots of greenery. ("green" investment in management ego)

1 Xanadu was the summer capital of Kubla Kahn (1260 - 1294) who founded the Yuan Dynasty in China. The city was built in the 1250s during the Mongol invasion and eventually reached a population of 100,000. When Marco Polo visited it in 1275 he described its luxury and opulence.

Kubla Kahn was the first non-Chinese emperor to conquer all of China. He ruled a realm which extended from the Pacific Ocean to the Ural Mountains in Russia, one fifth of the world's inhabited land area. As an aside, naturally he was familiar with elephants. In 1279 he was given twelve of them by Naser ad-Din, the son of a regional governor. (Wikpedia, 2011).