Many innovations have long been acknowledged as Chinese. Silk, gunpowder and paper are examples, as well as attributing the invention of printing to Feng Tao, ca. 1000. (Actually printing was developed in parallel with Korea and Japan, with the earliest printed documents in these two countries dating between ca. 750 and 770. In contrast, in Europe Johannes Gensfleisch (1399? - 1468), better known as Gutenberg, developed his method in 1450.) Chinese science and technology over the millennia also included extensive medical research, including acupuncture and far more, cf. Needham´s classic work Science and Civilization in China: Volume 6, Biology and Biological Technology, Part 6, Medicine.

However the above does not convey the extent of the difference between the Chinese and European cultures in the past. The paragraphs below make this difference clear. For not hundreds, but thousands of years China was the world's dominant culture and economy. (As late as 1820 China accounted for one third of the global economy, versus six percent today -- and that after the past 20 years of double digit growth!) To clarify the word "dominant" a quote, with some minor re-writing, is presented from 1421 The Year China Discovered the World, Gavin Menzies, Bantam, 2002, p. 63.* (The link is to amazon.com, where a new hardcover copy is available (2012) for $13, versus amazon.de, where a new copy of the translation costs a mere 125€.) 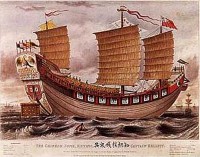 “In March 1421, Henry V (1387-1422) married Catherine of Valois in London. The six hundred guests were served salted cod on rounds of stale bread that acted as plates. Henry the V´s library consisted of six handwritten books (printing was unknown in Europe). Catherine de Valois wore neither knickers nor stockings at her wedding. (Her "perfume" is best left undescribed.) As one of Europe's leading monarchs, Henry the V could put an army of five thousand men in the field, armed with swords, pikes, and the feared longbows. When he went to war against France in June of that year, he ferried his army across the Channel in four fishing boats, carrying a hundred men on each crossing and sailing only in daylight hours.

In December 1404 Emperor Zhu Du commissioned two trusted advisors to lead 2,180 scholars to prepare the Yong-le-Dadian encyclopedia of literature and science. The four thousand volumes were completed some 15 years later, in March 1421, in time for the inauguration of the Forbidden City, which took place some three weeks before Henry the V´s wedding. Zhu Du´s twenty-six thousand guests were served a ten-course banquet on the finest porcelain. His favorite concubine was clad in the finest silks and her jewelry included rubies from Sri Lanka, Persian carnelian, Indian diamonds and Chinese jade. Her perfume contained ambergris from the Pacific, myrrh from Arabia and sandalwood from the Spice Islands. Zhu Du could field an army of one million men armed with guns. He sent his guests home in a fleet of one hundred ships with a complement of thirty thousand men.”

In fact, to a cultivated Chinese, medieval Europeans, even the most aristocratic ones, appeared hairy, disease carrying, smelly barbarians. (That opinion may still be held by the senior Chinese official you, as a Westerner, are dealing with. Try to avoid confirming this perception!) Catherine de Valois would not have stood comparison with a concubine of the fourth rank from Zhu Du´s court. (The concubines were selected from the innumerable women in the imperial residences, ranging from the equivalent of ladies in waiting to kitchen maids. The Kaiser was ritually allowed to have, besides a favorite, three of the first rank -"Fei", nine of the second rank -"Pin", twenty-seven of the third rank - "Guei Ren" and eighty-one (later reduced to seventy) of the fourth rank - "Tschang Dzai.")

*Gavin Menzies presents an apparently overwhelming body of evidence, including DNA studies, is presented to show that the Chinese discovered America in 1421, some 71 years before Columbus did. However, that still does not give the Chinese a claim as "first", as Lief Erickson (ca. 970 - ca. 1020) and the Vikings came to North American shores about the year 1000. According to the Icelandic Sagas he established a settlement, Vineland. It was at the northern tip of the Canadian island of Newfoundland (at L´Anse aux Meadows).

"Apparently:" there has also been heavy criticism from academia that the research is flawed, an imaginative tale that does not meet scientific standards. There is a compelling summary of the book's faults in an Amazon.com review. Interestingly, the review is about a sequel Gavin Menzies wrote, 1434, The Year a Magnificent Chinese Fleet Sailed to Italy and Ignited the Renaisance. However the unfortunately anonymous reviewer, "Ves," who seems very knowledgable, goes into detail about the original "1421."

Regardless, the book is a fascinating treatment of China, its culture and its scientific history.

In 2004 I made my first trip to mainland China about a plastics recycling project (cf. "Testimony," "Losses (8) Strategy – China"). When one travels in mainland China without knowing Mandarin, one can not read the street signs, read a map, ask or understand the Chinese – even though they are very friendly and trying to be helpful. You are pretty helpless on your own. Therefore escorts and bodyguards are often assigned foreign visitors.

Usually bodyguards accompanied me every step, but late my first morning there a young woman who spoke some English was assigned to take me to lunch. I asked her about exchanging money, as I had not done that yet. She said that was not necessary. I would be her guest. Unsure of how her expenses would be treated, and knowing she had a low position in the firm, I decided to keep an eye out for a cheap place for us to have lunch. What if the firm did not cover her expenses? Besides, as far as I was concerned, just about any food at all in China was a wonderful adventure.

Finally, I noticed just the place. A street vendor was selling some kind of stew under an awning, and there were a couple of free stools there too. I enthusiastically brought my companion (with the wonderful English nickname “Sunshine”) to the vendor. I pointed to a large bowl of something, received it and ate it up. It was delicious, so I ordered a second one. Sunshine apparently is not hungry, as she eats nothing.

The next day at the office I am taken aside. The charming Sunshine had complained about me. I was astonished. What on earth could I have possibly done wrong?

Accompanying a foreign “dignitary” was supposed to be a reward. He would be taken to a fine, upscale restaurant for a magnificent meal – in which she would share. The company paid for it, of course, and she had gotten all dressed up for her big day.

And what had I done? I had insisted on eating some poisonous refuse prepared by a street vendor from road kill and vermin, a dish so awful that only a starving, homeless Chinese would even consider it. She had expected me to get sick on the spot. And then I had gone and ordered a second dish of the nasty, stinking, slop and gobbled that right up too. Even the street vendor could not believe his eyes.

I was requested not to mortify a poor working girl like that again.

A Sad Afternoon at the Club

Late in the afternoon one day a large group of us made off to a club, where a room had been reserved for us. The Chinese contingent consisted of a dozen people, including three women, one of them a senior manager (C-suites). The Western contingent consisted of three U.S. citizens. After a loud, vigorous, back and forth exchange of ideas and plans, with much laughter, translation and broken English, the announcement was made that it was now time to relax, drink and be merry.

A series of young girls entered the room, some of them with large cardboard numbers on them. I asked the Chinese woman who was a senior manager and knew a little English, what the numbers meant. She explained that a girl with a number was one who would NOT return to the hotel with you.

So I made darn sure the girl I wound up with had a LARGE, PROMINENT number on her. As she spoke no English, and I no Mandarin, I got a pencil and paper and showed her some mathematical puzzles. No, she was not an undiscovered math genius. However she certainly was a whole lot quicker at them then any of my MBA students, some of whom had engineering degrees. I was told the girls often came from poor, remote villages and had no chance to attend high school, let alone go on to university. What a waste. Sad.

While I was at the firm, the Chinese partners were excitedly awaiting the outcome of a test for a new employee. They had come across a young girl working in a factory who had impressed them. They had asked her to work in their office for a minimal salary, almost as little as she made in the factory. However, they would also pay for English lessons for her.

They had sent her off to the English language school with an envelope full of cash, representing months of salary for her. With this money she was to pay for English lessons for several people for the firm, including herself. I said that much money, cash, for a girl from a poor village, fresh out of the factory, must be an awful temptation.

The Chinese agreed. They wanted to see if she were honest now, rather than have her steal from them later. The girl came back, hours later than expected, with quite a bit of money left over. The Chinese were puzzled – why so late, and with so much money left over? The girl explained that she had spent the whole morning negotiating with the school to get a better price, as she was paying so much cash in advance.

Before arriving in China, I had read that toasts were drunk – and many of them. Now I will have a glass of red wine with dinner, or perhaps a beer at a beer garden or pub, but rarely. The years I worked in the Middle East I never had an alcoholic drink. Therefore I had decided not to drink any alcohol while in China and stick to tea, to avoid any embarrassing “toast” contests.

Furthermore, I was, as is my wont – Scots heritage -- careful about spending money, including other people´s money. Finally, I had managed not to make a fool of myself the afternoon and evening at the club.

Upon my departure, I was told I had successfully passed the interview (i.e. the week’s inspection) to participate in the plastics recycling project. My competence had never been in question, but as a round-eyed, disease carrying, hairy white foreign barbarian, my character had. I appeared to be healthy (apparently my early morning jogging had been noticed), did not drink, did not spend money, and did not prey on adolescent girls.